The next time you eat a banana, take a moment to appreciate that you are likely enjoying a genuine cruise history artefact. From the turn of the twentieth century, reefer ships from a massive fruit trading company came to shape the Caribbean cruise market, appeal and logistics and pioneer the framework of the modern cruise industry, and here’s how.

It started with a railway...

…as these things do. In 1871 the government of Costa Rica contracts an American railroad engineer, Henry Meiggs, to construct a ‘trans-country railroad’ from the Caribbean to the Pacific. This proves a lot more expensive and time-consuming than anticipated and 11 years in, the Costa Rican government runs out of money to pay Meiggs. Instead they offer payment in the form of tax-free land, specifically 3.200 km² (800,000 acres) of fertile soil along the train route as well as a 99-year lease on the operation of the railroad. Not knowing what else to do with the land, Meiggs starts to experiment with banana plantations, mostly as a convenient food source for his local workers as the highly perishable produce cannot practically be brought to market further away.

But by the early 1880’s refrigeration technology is in the middle of a breakthrough – refrigeration compressors are being successfully installed on ships, producing the first generation of reefer ships (refrigerated cargo ships) and suddenly allowing perishable goods to be transported over much longer distances. All of a sudden bananas could be brought to market in the US, where they were considered a delicacy and traded with high profits.

From trains to bananas

The engineering company, now under the leadership of Meiggs’ nephew, Minor Cooper Keith, seizes the opportunity and starts up a steamboat line in 1890 from Puerto Limón to New Orleans to export bananas. This spin off from the engineering operation soon becomes known as Tropical Trading & Transport Company. Nine years and two mergers later the company emerges as the powerful United Fruit Company (with Keith as its VP), controlling an empire of banana plantations in the Dominican Republic, Cuba, Colombia, Costa Rica, Jamaica and Panama, a vast railroad / infrastructure network, a large fleet of reefer ships and more than 75% of the North American banana trade (about 400.000 tons a year).

The reefer ships of the United Fruit Co. (UFC) were mostly of the ‘cargo liner’ type. While bananas went in the hold, a number of cabins were available in the superstructure, initially only used to take company personnel around operational areas. But it didn’t take long for enterprising company heads to figure out that these could be sold as cruise cabins and produce additional revenue. Many of the reefer ships called at multiple Caribbean ports to pick up fruit, so that qualified as ‘an itinerary’ and they departed many different US ports (Atlantic and Pacific), permitting broad access to the passenger source market. As far as competition, there was barely any – a few companies were operating seasonally in the region but nowhere near as affordably and extensively as the UFC could. All it took was a bit of clever marketing to style the workaday banana boats as elegant cruise ships.

‘Where the pirates hid their gold’, ‘romance and history of the Spanish Main’ and ‘every passenger a guest’ were some of the taglines that accomplished this but the slogan that came to define the enterprise for the ages emerged early in the 1900’s; ‘The Great White Fleet’, so named for the white-painted hulls of the reefer ships*. It is not hard to see that these marketing pitches are the same ones employed to this day for the Caribbean, thus making United Fruit Company the forefather of the ‘Caribbean image’ of cruise tourism ... and perhaps also the reason why a majority of today's cruise ships have white hulls.

And it worked. The enterprise hit an incoming tide of US mass tourism just right and demand for banana boat cruising grew swiftly and steadily, prompting UFC to increase passenger capacities and improve tourist service and amenities for each new generation of reefer ships. What started as a handful of rough, refurbished US Navy surplus cargo ships evolved into a fleet of dual-purpose, state-of-the-art cargo liners. Gross tonnage grew from around 3.000 to 5.000 per ship, passenger capacities increased from 50+ guests per ship to eventually 110+, on board accommodation standards (while decent from the outset for their time) evolved to rival some hotels ashore and over time ship amenities grew to include swimming pools, barber / beauty salon, gift shops, conference rooms, shore excursion programs etc. – all features that the modern cruise industry would subsume and continue to build upon as it launched in the 1960’s. 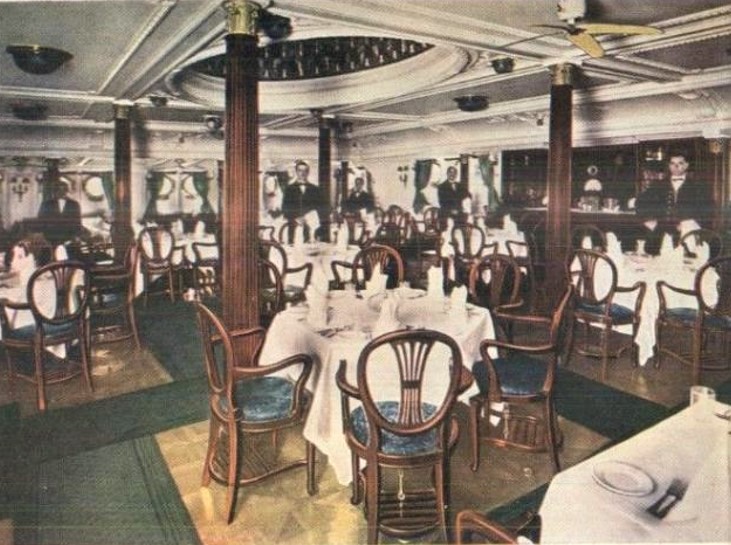 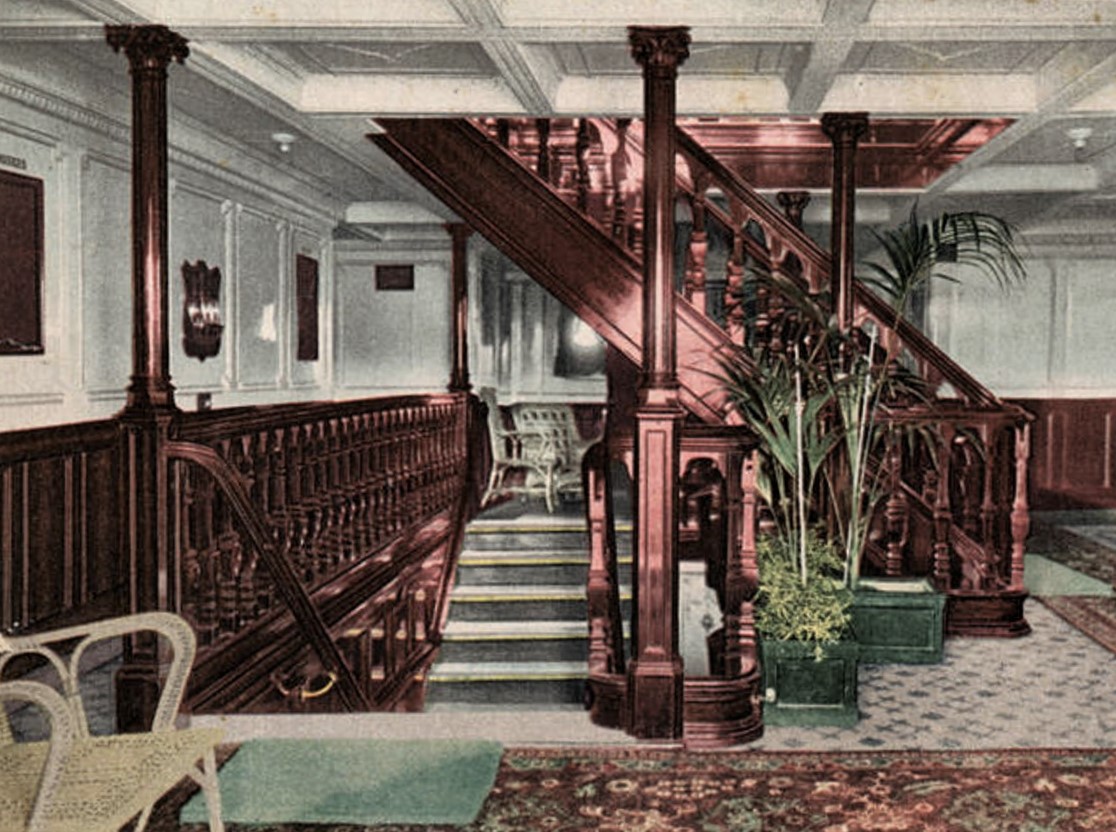 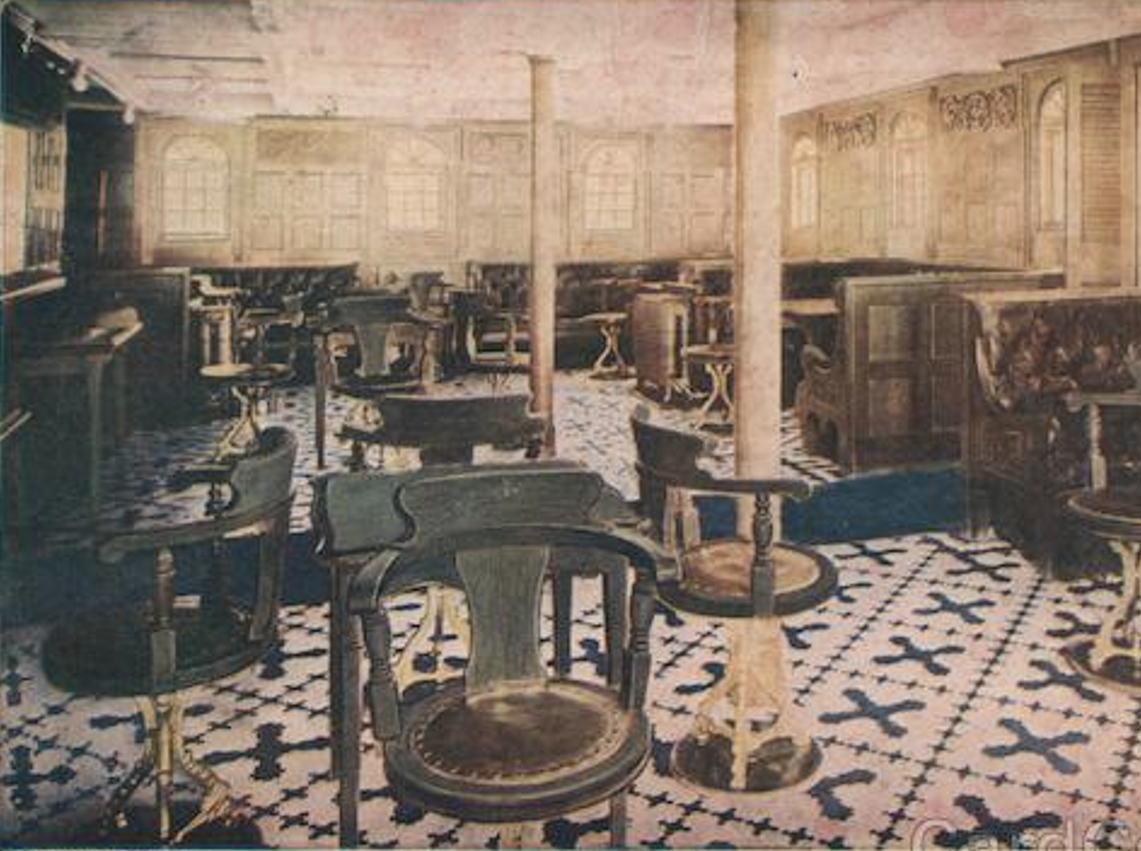 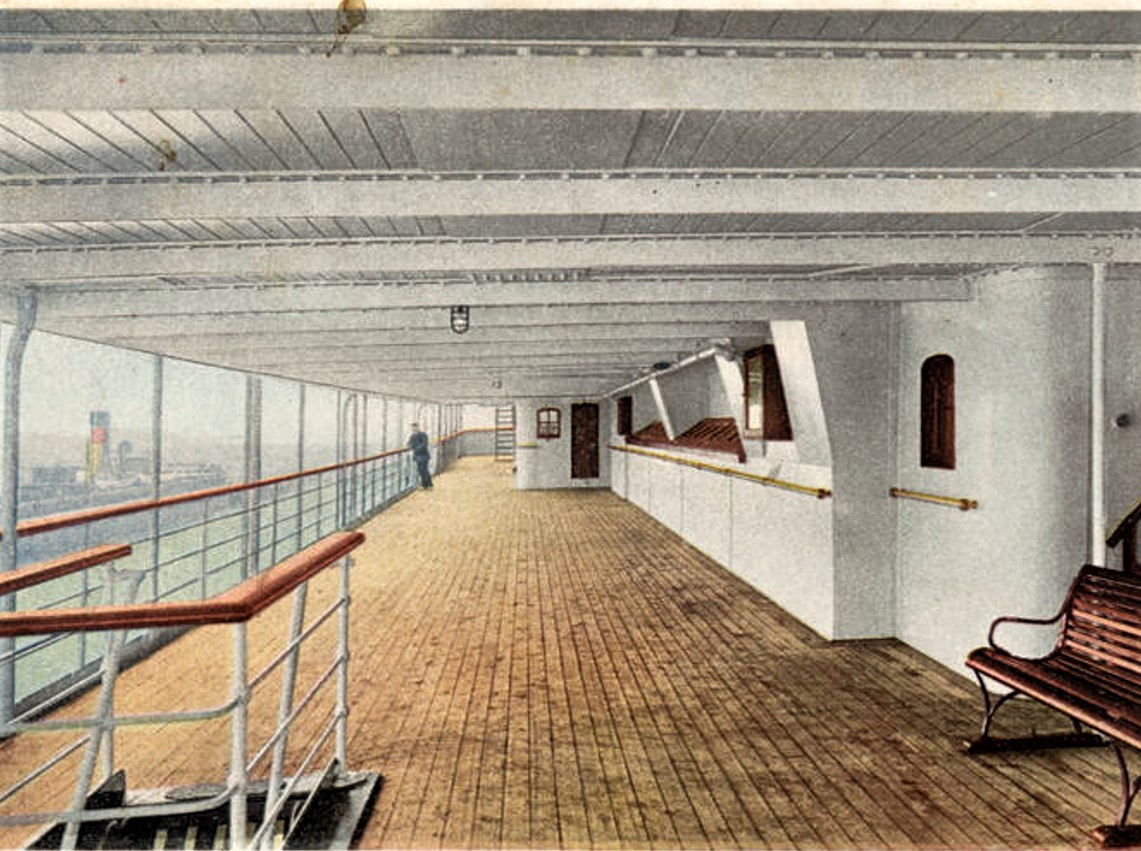 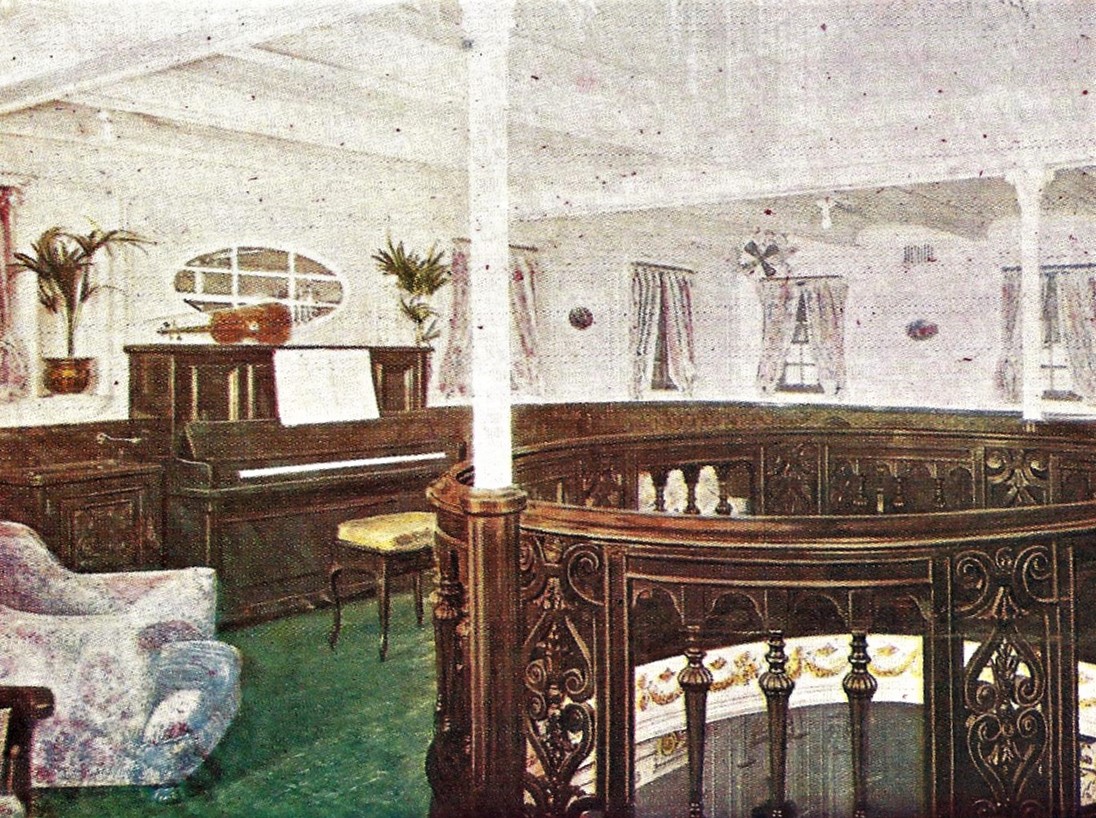 Banana boats came in many shapes and sizes, but in general passenger accommodation was arranged over 2-3 decks in the mid ship superstructure. Cabins were small but handsomely appointed with late Edwardian decor; accommodating up to 3 – 4 guests, well-lit and air-conditioned and with private bathroom facilities from an early age, most even featured a window and a view. Public areas included the dining room, the ‘social lounge’ and (depending on ship size) a number of smaller lounges, e.g. a smoking room, card room, music room, library etc. – all with wood-panelled walls, upholstered furniture, wall to wall carpets and also some palm trees and cane furniture thrown in for ‘tropical flavor’.

A purser’s desk made up the on-board guest information / service hub and white-coated stewards saw to the practical needs of guests but there was nothing like ‘cruise staff’ and not much in the way of organised, social activities beyond meal times. Guests were still very much on their own to make merry and get acquainted, using only the musical instruments and games provided on board. Obviously, guests didn’t have the full run of the ship, as these were working areas, but they could use the wide outside decks of the superstructure to promenade, exercise or sunbathe.

The cruises were typically between 1 to 4 weeks long, depending on departure port, and included meals and accommodation (other on board expenses and shore excursions were extra). They were targeted squarely at the American middle- and upper middle class. UFC could keep pricing highly competitive by virtue of merely running the cruise operation as a sideline business and that no doubt help fuel the demand. In the 1900’s weekly Caribbean cruises from the East Coast ran about 60-75 $ p.p. (from 1.600 – 2.000 $ in 2020 purchasing power) and a longer voyage, like the combination cruise & stay Jamaica package pictured here, cost 100 $ (2.900 $ in 2020 terms).

And for a good long time, everything went the UFC way; the opening of the Panama Canal in 1914 enabled a tourist / banana connection across the Panama isthmus, boosting business for both. The outbreak of World War I in 1914 took all of the European competition out of the Caribbean market (though UFC did have to hand over a number of ships for commissioning to the US Navy) and the American Prohibition of 1920 drove thousands and thousands of Americans out to sea as one of the few legal ways to enjoy alcohol. Business was very good indeed.

By the late 1920’s United Fruit Company runs the largest agricultural enterprise on the planet, controlling more than 1.332 sq.mi. / 3.450 km² of farm land, employing 40.000 staff, running 621 mi. / 1.000 km of railroad and operating more than 80 reefer ships. It also runs by far the biggest tourism operation in the Caribbean, now also including shore side resort hotels in Jamaica and a publishing arm dedicated to churning out travel literature, brochures, films and a monthly magazine called The Golden Caribbean. But they are no longer the only cruise game in the Caribbean; chief rival Standard Fruit copies the ‘banana boat cruise’ concept and enters the cruise business in the 1920's, and from outside the fruit trading industry there’s additional competition from a growing number of travel operators and shipping lines. As many as 37 other operators are plying the Caribbean Sea by the mid-1920’s. The Caribbean is slowly turning into a lively, though still quite homogeneous cruise market.

The UFC cruise adventure peaked in 1928 with an impressive 70.000 cruise guests. The year after, the Great Depression set in and passenger numbers dwindled steadily until the onset of World War II, where most US-based tourism ceased entirely and most of the Great White Fleet was nationalised. After WWII, UFC resumed the banana boat cruise enterprise but switched its focus to the Pacific side of Latin America. The cruise operation continued up until the mid-50’s but never again reached the same scope and volume as in the pre-war years.

As is often the case, there is also a dark side to the story. Scratch the gleaming lacquer of the United Fruit success story just a tiny bit and it is revealed that it is built on a disturbingly thick foundation of corruption, labour exploitation, political meddling, strong-arm tactics, tax evasion, monopoly consolidation and other facets of rampant, exploitative neocolonialism. United Fruit Company is a primary reason why the term ‘Banana republic’ was even coined and why Central America has such a troubled history of political unrest … but that’s an entirely different story.

And if you’re now thinking ‘That’s some fascinating history – I’ve never even heard of United Fruit Company’, that’s probably true. But you have likely heard of Chiquita Bananas and that’s the name they assumed after some major restructuring in 1984. So if it’s a Chiquita banana you are munching on, you definitely have your hands on a genuine cruise history artefact.

This is the sixth article in a series of historical retrospectives on the history of cruising prior to the industry formation in the 1960's. Although not academic papers, the articles are researched to the extent of my resources and abilities and strive to be as historically factual as possible. If you enjoyed it, feel free to like, share or comment and follow me (or The Cruise Insider) for more instalments.

* The Great White Fleet is not to be confused with Theodore Roosevelt’s global US armada tour of the same name in 1909 - evidence suggests UFC was using the moniker before the US navy.