The first leisure cruises in history were spartan affairs by today’s standards – the only parameter that even hinted at luxury was the price of the ticket. Ships were small and fragile, accommodation was basic, food and beverages were unsophisticated, and amenities and facilities very limited. It took significant advances in maritime engineering, ship design and experiential format before the cruise product matured to a point where you would even designate it a ‘real’ luxury cruise. But if I had to point to a time in history when that first real luxury cruise became a reality, I would point to January 22, 1891.

The winter sun is shining from a clear blue sky but it is bitterly cold – a chilly Northern wind blows across the pier and crushed drift ice fills the harbour basin around the Steubenhöft pier. The 33-year-old Albert Ballin, Director of the Passenger Division at Hamburg Amerikanische Packetfahrt Actien-Gesellschaft (HAPAG), steps onto the bustling quayside, bracing against the cold, and looks up at his most daring enterprise yet. The black hull towering above the pier in front of him is that of the SS Augusta Victoria – an 8.479 GRT HAPAG luxury ocean liner – in full preparation for her imminent departure.

The ships orchestra is out on the pier in their dress uniforms, adding festive marches to the general din of departure. The last guests are still arriving - clearly high society, judging by their clothing, bearing and the copious amounts of luggage butlers and stevedores are hauling after them. Dock workers are busy loading supplies and prepping for departure, all the while cussing out the hundreds of gawkers and farewell-wishers crowding the pier to witness the spectacular sailaway. Up by the forward gangway a mix of imperial entourage and onlookers are restlessly milling about the stands from where Emperor Wilhelm II will see the ship off in a few hours time. Excited crowds are babbling, nervous horses are whinnying, brusque officers are shouting, steam whistles are blowing, the freezing orchestra is harmonising. There is excitement, jubilation and coal dust in the air. It is a momentous occasion.

A voyage of luxury

A flyer for the Augusta Victoria luxury cruise, Hapag-Lloyd

The cruise the Augusta Victoria was about to embark on was a 58-day Mediterranean cruise, calling at 11 ports from Lisbon to Beirut, plus a stop in Southampton out and back. There was nothing groundbreaking about the itinerary or the fact that an ocean liner was going on a cruise – that had all been done before. What was new was the sheer level of luxury involved; this was the first all-inclusive, luxury cruise. The ship had 2nd class and steerage accommodation too, but used only first-class cabins for this voyage. The 1.100 pax capacity ship would only carry 241 guests, which – given the crew of 245 – ensured a service ratio of better than 1:1. Fares ranged from 1.600 to 2.400 Goldmark p.p., the equivalent of EU 28.500 to 42.800 in today’s money – or in 1880’s economics, the equivalent of 2-3 times the annual household income of a working-class family. A cruise this expensive or this luxurious had never been offered before and consequently the passenger list was a veritable Who’s Who of Europe’s business elite, political establishment and aristocracy. Interestingly, the German contingent of guests were almost exclusively male – only Ballin brought his wife on board. Common (German) perception held that such long sea voyages would be ‘too strenuous for the womenfolk’. Had it not been for 64 intrepid British ladies joining in Southampton, the voyage would also have been the world’s first, luxury ‘sausage fest’ at sea.

The men of the Augusta Victoria (note the matching captain's caps)

This new concept had been Ballin’s brainchild and he must have felt equal parts vindication and trepidation at this moment. He had proven his many doubters wrong (including many of his fellow directors on the HAPAG board). People had scoffed at his idea of using Atlantic liners for luxury leisure cruises in the off season for Atlantic traffic (liners were typically laid up in winter season when the Atlantic was too unpleasant to cross). No one would pay that much to go on a ship for that long in the midst of winter, they had objected. But they were wrong. The 241 boarding guests were living proof that the idea was attractive and marketable. But the most crucial question was yet to be answered: Would these 241 pioneer cruisers return with rave reviews, prompting a surge in demand for this newfangled holiday trend, or would they return unimpressed, even negative, at having blown so much time and money on a ‘boat ride’.

A man of vision

Having made a name for himself with the successful Union Line, Ballin was hired by HAPAG in 1886 to head up the Passenger Division. Despite having worked mostly with low-budget steerage travel, he brought with him a focus on the wealthy clientele and a vision that if ocean travel could be made sufficiently comfortable and luxurious, it would not only give HAPAG a competitive edge in passenger shipping, but potentially even turn into a luxury commodity in itself. This was a time when most shipping companies were obsessed with speed, fighting bitterly over the title of ‘fastest Atlantic crossing’, and not paying much attention to the quality of the on board experience. The general philosophy was that long ocean voyages just had to be endured, not necessarily enjoyed. But Ballin not only wanted his guests to enjoy the voyage, he wanted them to be wowed by the experience. Inspired by his frequent stays at Europe’s finest luxury hotels, he wanted to recreate same standards of decor, luxury and service on his liners, to the point where guests would not be able to tell if they were in a luxury hotel ashore or at sea.

The first ship to embody Ballin’s ‘floating hotel’ philosophy (and the Godmother of a subsequent trend of palatial interior design) became the Augusta Victoria in 1889, so the fact that she was even suited and equipped to pull off such a lengthy luxury cruise was already due to Ballin’s visionary foresight. Her interiors were without a doubt the most opulent at sea – spacious, stylish and ornate (at least in first class). The interior design could best be described as ‘aggressively rococo’ where every inch of surface is covered in elaborate ornamentation, curvy moulding, gilded cherubs, swirling scrollwork, frescoes, prisms and mirrors. The result was dizzying, but impressive in its consistency. 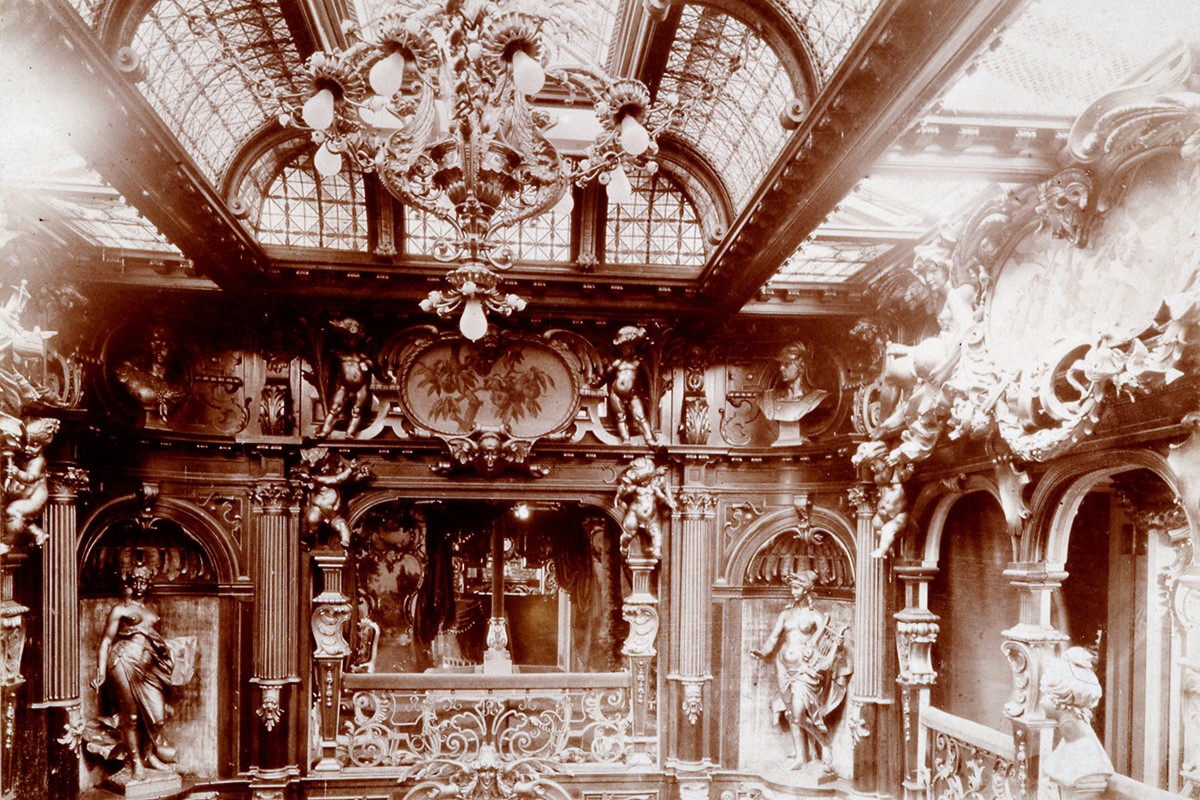 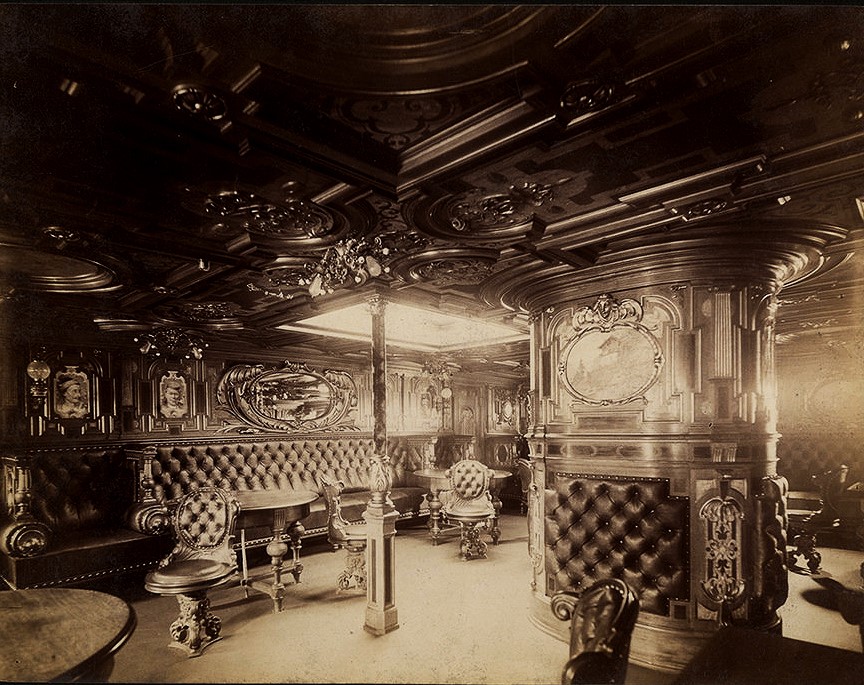 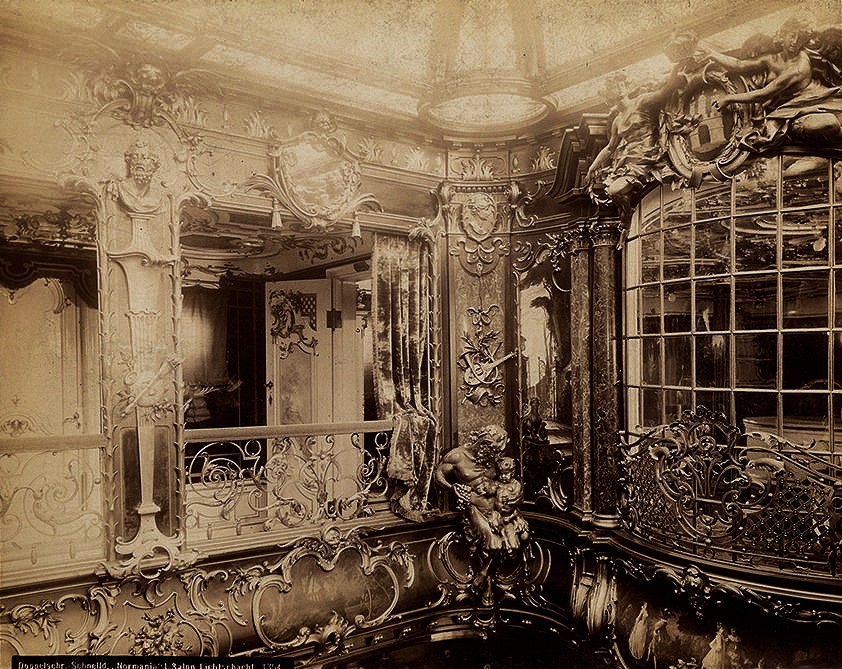 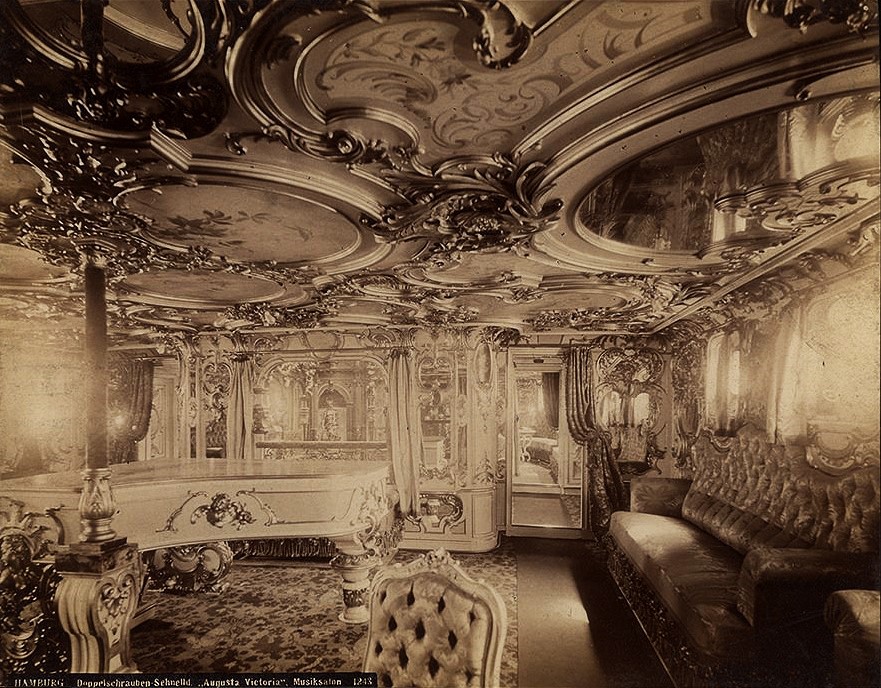 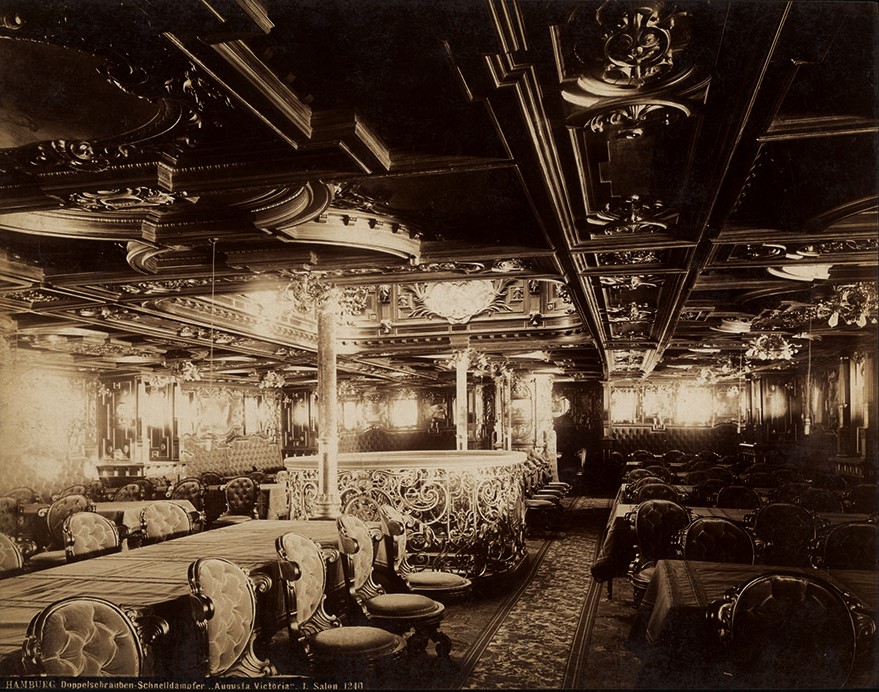 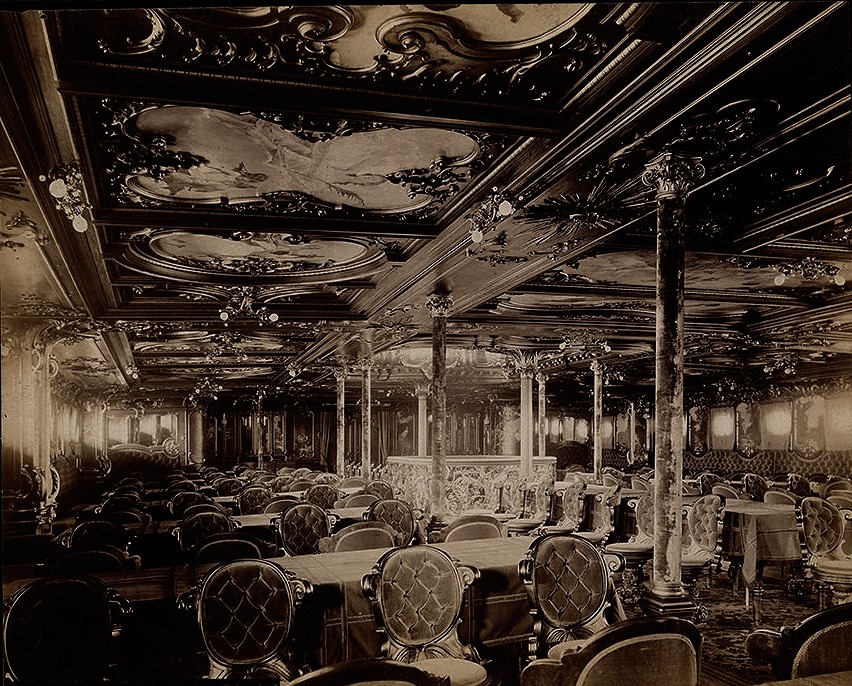 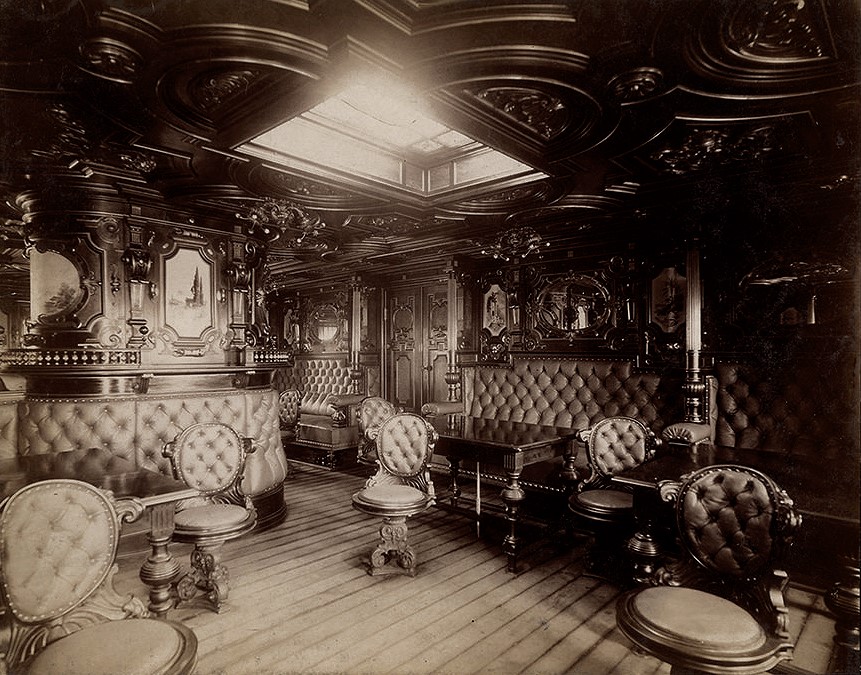 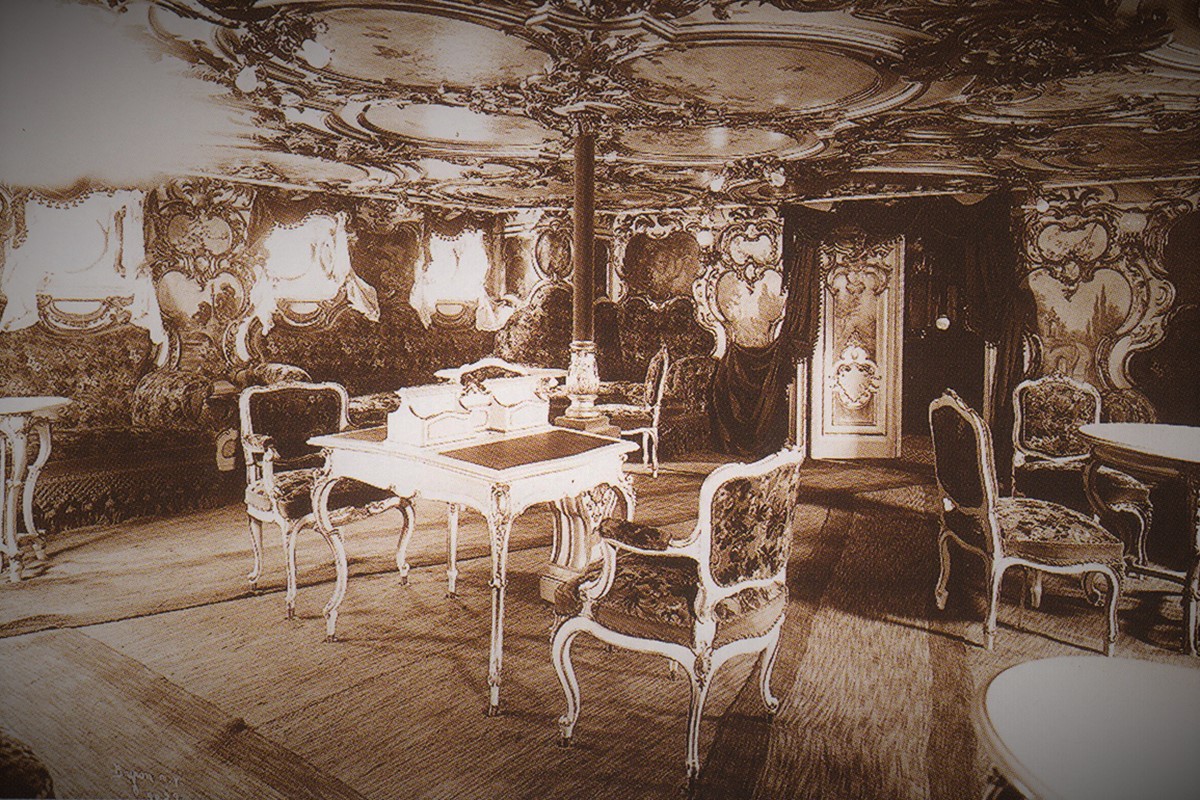 All first-class cabins and public spaces were arranged along the ‘Oberdeck’ (top deck), with natural lights coming into the interior from wide skylights. Cabins were still small (because this was still primarily an ocean liner and the profit lay in getting as many people as possible from A to B), but they were exquisitely appointed. Hard as it is for us to imagine about a ‘luxury cruise’, in-cabin plumbing still was not a thing in 1891 – toilets and bathrooms were communal and a designated ‘bath steward’ helped guests coordinate their daily ablutions. Besides the large dining room forward, the ship featured a number of smaller lounges for smoking (men), writing (women) and music and also a reception area by the grand staircase.

Ever the publicity hound, Ballin had invited representatives from German and international press on board, ensuring that the whole world could follow along in the fantastic journey. Together with these journalists and an illustrator, he also pioneered another hallmark of the cruise experience; the on board newspaper – a forerunner to today’s Daily Program. Another essential component of the cruise experience that Ballin pioneered was the role of the ‘cruise director’. There were no dedicated ‘cruise staff’ on board but eager to ensure his guests’ enjoyment at all times, Ballin inserted himself as MC, host or commentator in every single event or function on board. Whatever the event, Ballin was always there; presenting with flourish, leading cheers, boosting spirits, patting backs, shaking hands and providing a sense of occasion – much like any other cruise director would today.

So when the Augusta Victoria pulled away from the pier that cold January-day, she was heading out on an unparalleled leisure experience on board the most luxurious accommodation afloat with sumptuous, all-inclusive gourmet fare, exquisite customer service, cultured company, exotic destinations, exclusive shore excursions and a young HAPAG director working tirelessly to elevate the experience at every turn.

The 58-day itinerary of the SS Augusta Victoria, Hapag-Lloyd

So, was the world’s first luxury cruise eventually deemed a success? Most definitely! The SS Augusta Victoria returned back to Cuxhaven on March 19, 1891, with an almost equal amount of fanfare. The cruise had lasted 57 days, 11 hours and 3 minutes. As soon as she had docked, the press delegation rushed off to their respective offices to finish and publish their rave reviews and the high society scattered with equal rush to their respective social circles to brag of the amazing experience they had just enjoyed. Word spread like wildfire that ‘luxury cruising’ was the ‘new black’ for the socialites, bon vivants and magnates of the age. No one on the HAPAG board of directors could refute the tremendous success of Ballin’s gamble, in terms of profit, popularity or publicity, and from this point on it became standard procedure to schedule the company's Atlantic liners for pleasure cruises, so-called ‘Gesellschaftsreisen’ (‘Society journeys’ – the ‘high’ was implied) in the winter season - a practice which competing shipping companies soon began to imitate. The luxury cruise had come to stay.

That didn’t stop the other HAPAG directors from continuing to underestimate Ballin’s vision. Even after he made managing director in 1899 and announced he would now construct a ship exclusively for luxury pleasure cruising, they sniggered amongst themselves; ‘Now the megalomaniac is building his own luxury yacht..’ … but that’s a story for a different time.

This is the seventh article in a series of historical retrospectives on the history of cruising prior to the industry formation in the 1960's. Although not academic papers, the articles are researched to the extent of my resources and ability and strive to be as historically factual as possible. If you enjoyed it, feel free to like, share or comment and follow me (or The Cruise Insider) for more instalments.

P.S. Want to know how the cruise itself went? The press reports on the voyage from two German newspapers have been compiled into a book; Die Orient-Reise Der Augusta Victoria Vom Januar Bis März 1891 by H. Wenth, Wentworth Press. Reproduction available on Amazon, but it does require you to be able to read German.